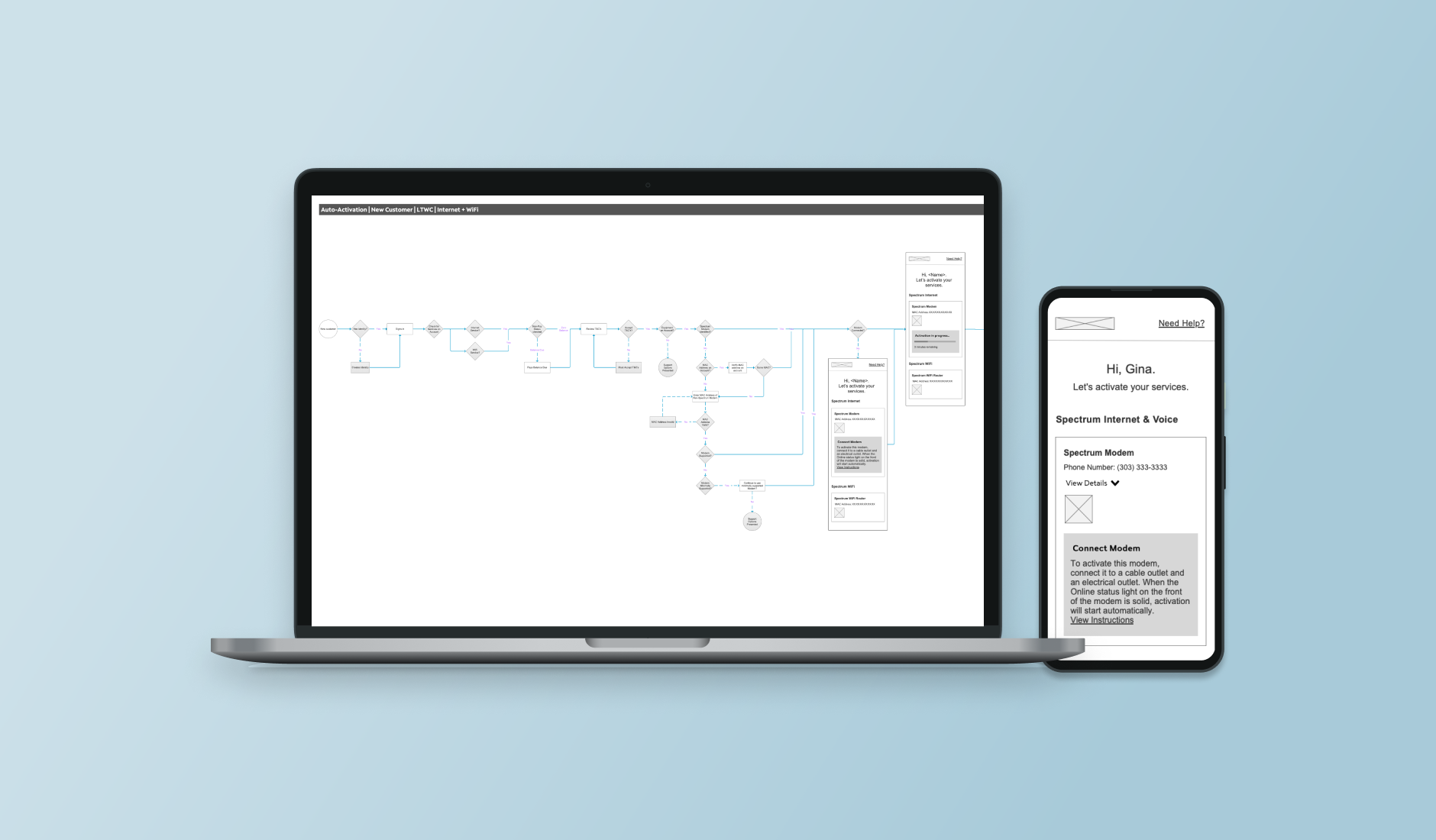 How might we make it easier for Spectrum customers to connect and activate their internet, TV and voice equipment?

I joined the Spectrum activation project as the team's content designer, and then after almost a year, after the MVP designs had been delivered, I also took on a UX role. In this hybrid role, I worked on other activation use cases, such as improving equipment connection prompts, equipment swaps, and router activation, using the existing designs.

When the My Spectrum mobile app team made in-app equipment activation a priority initiative, I supported that team as a subject-matter expert, and then eventually became their product designer.

Together with our team's researcher, I reached out to several contacts within the company to get data on the number of successful activations, most common service packages, methods of ordering, and why customers call support during an activation—among other data points. This data helped us reprioritize use cases with our business owners and focus on the primary cause of failed activations: customer struggling to connect their equipment.

Our team also had the opportunity to visit a call center that specifically supports activation. At the call center, we listened to customer calls, interviewed call center representatives and supervisors, and collaboratively created a journey map of the customer experience.

Through this visit we learned that the majority of activation issues can be resolved over the phone, meaning that customers either just needed help connecting their equipment or there were upstream issues on our end that had to be fixed.

We also reviewed a couple of prototypes of our designs with these agents and got their feedback. While they're not the primary users, they quickly spotted some issues that we later validated in user testing.

I loved getting to meet some of the call center representatives and listen in our customer support calls. They have a tough job at times, but their professionalism and genuine desire to help customers was inspiring and motivating.

Limited by the one-page MVP concept, we decided to improve the prompts to connect equipment by creating and testing six variations of the content shown on an unactivated device card. I created wireframes, copy and clickable prototypes to test each of those variations.

The results clearly showed that user preferred Option 2, which had the least copy and linked out to a support article that has much more information. Testers also preferred following the video in the support article over reading through the detailed text instructions.

Based on these results, I rewrote the equipment card content so it hand only minimal copy (with a directive subheading) and a link to an appropriate support article. 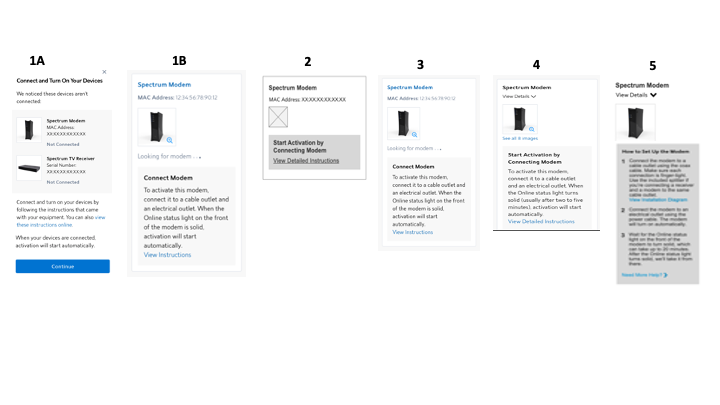 swapping a modem or TV receiver

Customers occasionally need to replace a Spectrum-provided modem or TV receiver, and activate that new equipment. With the one-page design, we were very reliant on copy within the device cards to prompt the customer on how to swap out an old device. Despite my best attempt at writing clear messages, testing showed that customers were unable to determine what they needed to do first and expected a step-by-step task flow.

Testing swaps underscored a theme we'd heard throughout our research and testing: customers prefer a step-by-step flow with specific and succinct instructions (and visuals) for each step. Our stakeholders ultimately decided to build and ship the one-page version we had before testing, but agreed to explore a step-by-step approach in the future.

While many customers don't know the difference between a modem and router, they do expect to see both pieces of equipment on screen if they received them in their equipment kit. The previous activation site didn't display routers on screen because they technically don't need to be activated (the backend calls only displayed equipment that needs activation). Through research, we were able to show stakeholders that testers unanimously wanted to see all of their equipment on the activation site. This led to conversations with engineering about how to change the backend calls to display routers in the interface.

Our main challenge was convincing stakeholders to reconsider their initial concept for the new site design based on what we were learning through testing. While some saw the value in iterating on designs before launching the product, this challenge was exacerbated by the fact that engineering had started development before testing and final designs were completed, creating inertia and resistance to pivoting.‍ 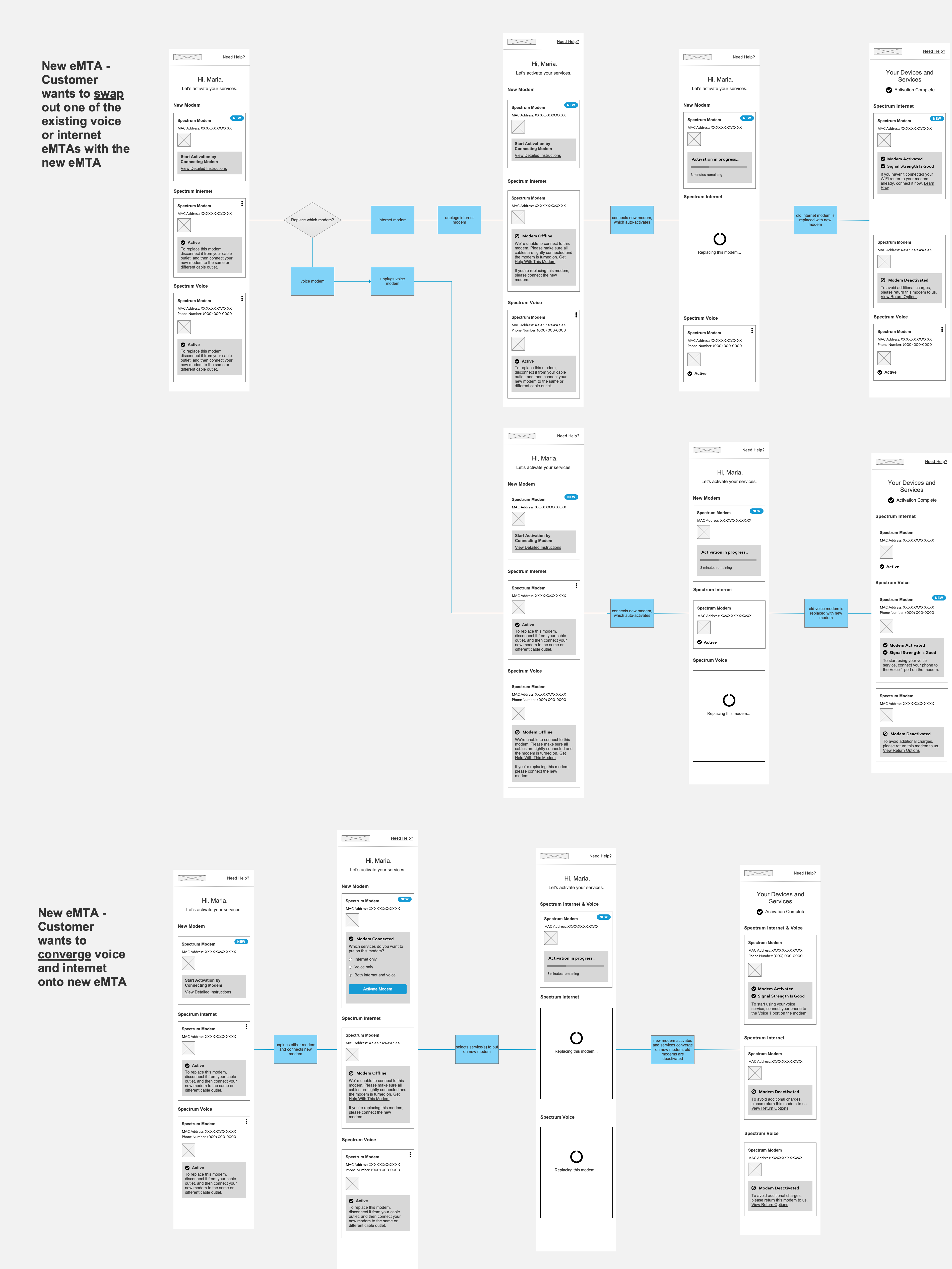 Testers generally did not understand the process for swapping out equipment because there was no clear order of operations. This was one of many use cases where the one-screen concept broke down.
Ux samples
router displays

This user flow shows the flow a new internet and WiFi customer goes through when activating their equipment and services. For router activation, there were some nuances I had to account for depending on the legacy footprint of the customer.